Robert Sage has been Music Director of CYSO since 2014. He is also Music Director of the Claremont Symphony Orchestra and has performed a substantial portion of the symphonic and piano concerto literature with them. Dr. Sage received his Master's and Doctoral degrees in Piano Performance from the University of Southern California.
​ 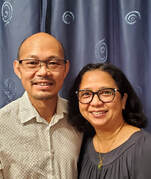 Yewmeng and Sandra Lee are Co-Executive Directors of CYSO. Mrs. Lee was born and raised in Burma and came to the United States 20 years ago, after living and working in Thailand, Singapore, and Australia as an accountant and database programmer. She earned her MBA from the University of New Castle, Australia. Mr. Lee was born in Kuala Lumpur, Malaysia, and came to the United States in 1984 to pursue an education in Physics and Mathematics, earning his BA at Denison University in Ohio and an MS in Mathematics from Claremont Graduate School, specializing in Statistical Process Control.  Mr. Lee was a college mathematics professor and later joined Experian as a lead statistician in the consumer and business credit Research and Development department. In 2007 the Lees co-founded and are co-owners of YSN Financial Corporation, a Rancho Cucamonga-based company specializing in Real Estate and Mortgage services.

The Lees have been active volunteers with CYSO since their son Nathaniel joined CYSO as a violinist six years ago. Mrs. Lee is also a board member of the Claremont Community School of Music. The Lees actively support various schools and music groups in Burma by sending music books and instruments that were given by various donors around the United States. They are also very active with Nathaniel's Boy Scout troop, and Nathaniel recently achieved his Eagle Scout rank. They love travelling both domestically and internationally, exploring new places, cultures, and food.​

Taylor Barr has been Director of PSE since 2018, succeeding PSE founder Pat Kuenning. Mrs. Barr has her degree in music education and her teaching credential from California State University, Fullerton. She started playing piano at age three and cello at age nine. She was a member of the cello section of Claremont Youth Symphony Orchestra for seven years and is currently a cellist with the Claremont Symphony Orchestra. She teaches orchestra at Chaparral Middle School in Diamond Bar.

Jesse Barr has been a Southern California public school music educator for over 14 years, teaching both band and orchestra in grades 4 through 12. Mr. Barr began playing the violin at age five and soon after the electric and double basses. He studied classical violin and jazz bass at California State University, Fullerton, where he earned his BA in Music Education and his teaching credential. He has been a freelance bassist performing with rock and jazz combo projects since 2005 in the Orange County and Inland Empire areas. Mr. Barr is a proud member of the Southern California Band and Orchestra Association and Phi Mu Alpha Sinfonia. He currently teaches band and orchestra at Santiago K-8 School in the Santa Ana Unified School District. He is proud to be the newly appointed Assistant Instructor of the Prelude String Ensemble, where his passions for both teaching and music are welcome.

The Claremont Symphony Orchestra Association founded CYSO in 1983 to provide an orchestral music experience for young people in Claremont and the surrounding cities. At the time, state-wide budget cuts were forcing schools to cut or reduce services, and programs in Music and Art were among the first to be negatively affected. The CSO Board conceived CYSO as both a supplement to school music programs and as a playing opportunity for students whose schools no longer offered orchestra classes.

CYSO performs two free concerts annually in Bridges Hall of Music on the campus of Pomona College in Claremont, California. The orchestra is led by Music Director Robert Sage and managed by Co-Executive Directors Yewmeng and Sandra Lee.

Prelude String Ensemble (PSE) is a preparatory string orchestra ensemble working in partnership with CYSO. Established in 2014, PSE is for elementary and middle school-aged string students (violin, viola, cello, bass) with a minimum of one year experience who would like to gain experience playing in a mixed string ensemble, improve their sight-reading skills, and prepare for future placement with CYSO. PSE is composed of approximately 40 students.

Since its founding, PSE has seen a number of its string members “graduate” to CYSO. The ensemble is led by Director Taylor Barr.